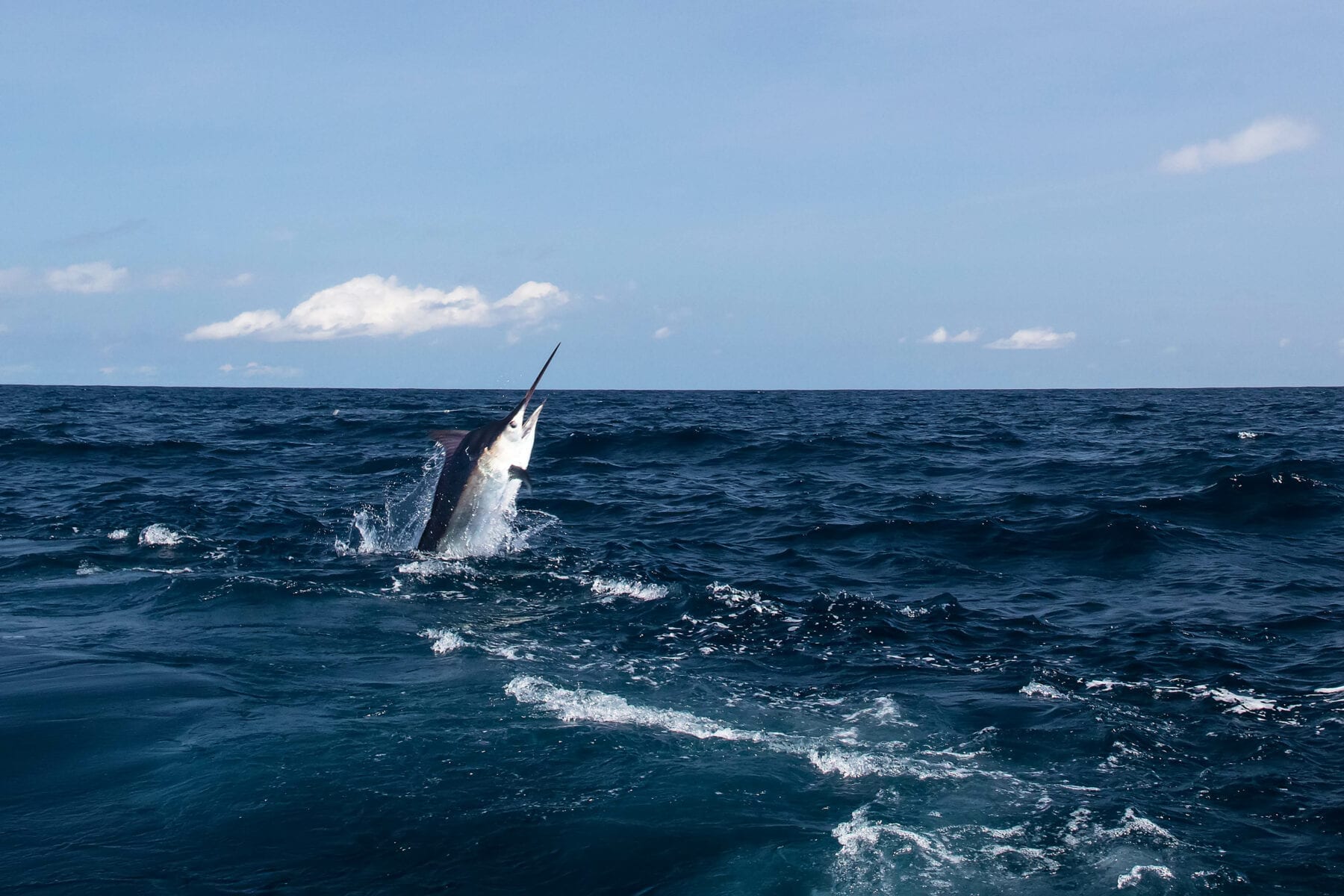 Visitors always ask us what to expect while fishing in Panama, and the answer is lots of catches year-round! Of course, some months are better than others, especially if you are looking for a particular species. This article should help you decide when to visit and learn what are the most popular Panamanian fish species.

Cala Mia Island Resort resides in the Gulf of Chiriquí next to a marine park in Panama’s Pacific coast. Within our hotel, we have Panama Nautical Club which specializes in organizing fishing trips in Panama. Some of our guests want to go out for a few hours near the hotel to do some inshore fishing. They can catch species such as roosterfish, snapper or sierra, which our chef can then prepare for dinner. Guests can take this type of trip in one of our smaller boats such as the Mercury which is a 26-foot Caribre Pro with a center console.

If you are just coming to experience all the different types of fish in Panama, then your best bet is to pick one of our Panama sport fishing packages. They are all-inclusive with transfers to the hotel, lodging, meals, and drinks. We will assign a bigger fishing boat for offshore fishing, such as the 52-foot Nick’s Time or 32-foot Legend which are both Flybridge Sportfishers. All options include an experienced captain and mates who know the area very well to take you to the best places to catch fish native to Panama. What varies between packages is the number of nights and anglers per boat.

You can easily recognize roosterfish by seven long spines that come out of its dorsal fin. They are part of the jack family and can reach up to four feet, but it is more common to catch smaller ones. Although they can weigh up to 100 pounds, the majority range between 20 to 40 pounds. Usually, they swim near the shoreline since this is where they feed. They are very fast fish which fight strong—if one follows your lure, you should reel fast and pull. It is possible to catch roosterfish all year round. We recommend catch and release with this species since they are not good fish to eat.

There are about 105 species of snappers that are very abundant, especially in the tropics. They live in schools and have large mouths with sharp teeth which help them catch other fish and crustaceans, as they are carnivores. Typically, they grow between 60 to 90 centimeters (two to three feet). Snappers are a year-round fish in Panama. Species include cubera, mullet, Pacific red, yellow, and silk snapper. People catch them mostly to eat since they are quite tasty. Snapper in Spanish is ‘Pargo’ and most people like to cook it fried.

Panama has several types of mackerel fish, but one of our favorites is the Sierra mackerel, which is quite common in our area. The good thing about catching this species is that you will have a delicious dinner. It tastes best when consumed fresh, and the meat makes delicious ceviche or fish tacos. With an average of 35 inches or sometimes more, they are not the biggest fish you’ll discover in the region. However, they can put up quite a fight since they are fast and aggressive, making them a fun catch. Sierra mackerel is easy to recognize since they are silver with blue undertones and yellow-brown spots.

December through April is the season to catch blue marlins, which you can find around Hannibal Bank and Isla Montuosa. This billfish is a trophy game because they are hard to catch since they can get themselves unstuck or destroy tackle. Unlike the black marlin, the fight starts as soon as you lure one. They are smaller than the black marlin but weigh more. Males usually do not surpass 400 pounds, while females reach up to 1,980 pounds, making them the trophy fish. Most of their lives they live in the open sea without coming near the shore. They look similar to the black marlins, but maintain their blue color when caught and have stripes. Another difference is that blue marlin pectoral fins fold easily, while black marlin’s fins stay rigid.

They are one of the most sought-after game fish due to their size, which can reach up to 15.3 feet (4.65 meters) and weigh up to 1,650 pounds. The “Pearl of the Ocean” is a strong fighter that lives in the Pacific. It is the 9th fastest animal in the world and the fastest fish, reaching speeds of 80 mph (129 km/h). Unlike the blue marlin, the black marlin does come closer to the shore near reefs and landmasses. In Panama, you can find them in Hannibal Bank and near Coiba. Although they are a year-round species, the best months to catch them are March, April, August, September, and October. To catch them, you will need to use live bait such as mackerel, bonito or small yellowfin tuna. When you catch one it will turn black, but when it is alive it is dark blue and white making it easy to confuse with the blue marlin.

Many refer to Dorado as dolphin fish and Mahi-mahi which means “very strong” in Hawaiian. November and December are specifically good months where you can catch them weighing between 40 to 60 pounds. Their season goes from October through February. The worse months to catch them are May through August. You can find them inshore and offshore. Usually, they swim in schools of fish except for large “bull” dorado males. They are fighters and tend to jump in the air showing their colorful skin. This type of fish is quite tasty to eat.

The best time to catch wahoo in the Gulf of Chiriquí is from September to December. If you are looking to catch this fish, then you should not come from March through May when conditions are poor. Mornings are the best time to catch them, so it is best to get an early start. This prized game fish is fast and long. They can swim up to 60 mph and grow up to 8.2 feet (2.5 meters) in length. It is silver in color with blue in its back and stripes which go down its body. People confuse them with barracudas since they both have razor-sharp teeth.

There are many species of tuna worldwide, but in Panama, you will find the yellowfin tuna which is also called “ahi”. This tuna lives in tropical waters and is a fast and strong fish due to its shape. It is easy to distinguish this colorful fish since it has a silver belly with metallic blue on its top and yellowfins, tail, and stripes. Yellowfin Tuna can range in weight from 10 to 400 pounds. If you want to catch bigger fish, you need to use live bait and wait till they tire out to reel them in. They travel in schools of their own kind or with other species including dolphins, whales, and whale sharks. The best time to catch them is from March through July, although fishermen can find them throughout the year. The only months that are not particularly good to catch them are September and February. To find them, we must go offshore to Isla Montuosa, Hannibal Bank or Isla Jicaron.

Please contact us at Cala Mia Island Resort to help you plan your fishing trip in Panama.