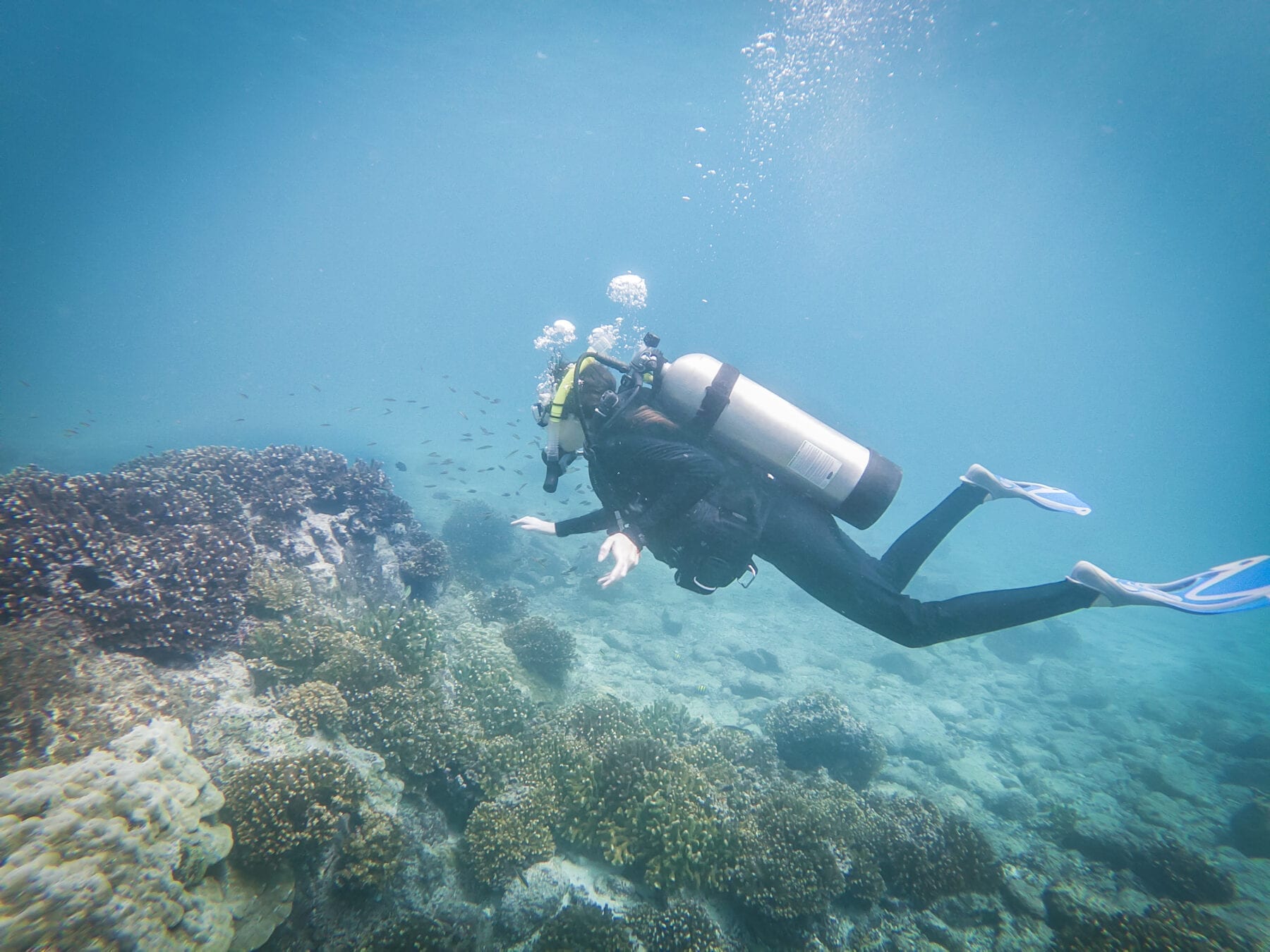 Located in the Gulf of Chiriquí Marine Park, Cala Mia Island Resort delivers some of the best diving in Panama. Our resort has an NAUI Dream Destination dive center with an instructor who can teach you in case you need to become certified or simply want to advance your diving level. During your vacation to Panama, you can choose from different diving destinations. As of this moment, we only do diving trips within the Gulf of Chiriquí and to Coiba National Park. But plenty of divers want to dive in several destinations around the country, which is why we have come up with this detailed list of Panama’s best diving locations.

The isthmus of Panama arose over two million years ago, uniting North and South America. It has hundreds of kilometers of coast on both sides. In fact, since it is so narrow, it is probably the only place in the world where you can dive into two oceans on the same day.

Diving in the Pacific and the Caribbean is quite different. The Caribbean better suits unexperienced divers since depths are less and it has more reefs and smaller fish. The Pacific is where you can find large schools of fish, whales, and even sharks.

To reach this island in the Pearl Islands, you must take a 15-minute flight or a two-hour boat ride from Panama City. Contadora Island is of volcanic origin, creating nutrients in the water which results in plenty of marine life. The underwater topography is quite rocky with lots of coral formation that range within 20 to 30 feet (6 to 9.1 meters). The orange coral and brain coral are the most common types, but there are also endemic coral species. Pacific waters offer an abundance of fish including angelfish, parrotfish, tuna, lobsters, oysters, eels, and manta rays. It is also possible to see sharks such as reef sharks, whitetip sharks, and brown or sandbar sharks.

This is a good place for novice divers since most of the dive sites are less than 10 minutes from Contadora Island. Coral Sur is the ideal beginner site since it goes down to 25 feet (7.6 meters), making it almost like an aquarium. The Cave has channels and caves, as its name suggests, and ranges from 20 to 35 feet (6 to 10.6 meters). Coral Norte is not deep, but it has a current, like The Channel where it is possible to do drift dives.

While individuals know Pedasi more for surfing than diving, the small town in Azuero does offer good places to go diving. A more advanced destination, Frailes North and South has deeper waters coveted by fishermen. This is a good place to see bigger fish among rocky structures and fan corals. Isla Iguana National Park is the more popular destination which is also good for snorkeling. “Los Hongos,” or the mushroom in English, is the best place to see 17 species of live coral. Its 99 acres (40 hectares) of coral reef is home to 750 species of fish, 200 species of invertebrates, and five species of turtles.

While it is possible to dive year-round in Pedasi, the best time to do so is in the winter months between April and December. If you visit during whale season, from July to October, we can almost guarantee you will see them playing while doing your surface intervals.

The Gulf of Chiriquí National Marine Park is one of Panama’s least known dive sites, which is why it is still so pristine. Very few tourists visit these islands which prevent damage to coral reefs and overfishing. The diversity is so big that over 800 species of tropical fish live in this part of Panama. We can also take those who are looking for sharks to places they frequent. 33 species of shark swim in the area including bull, hammerhead, tiger, whitetip reef shark, and guitar shark. If you do not want to see sharks, there are other dive sites available in the area.

Isla Secas is the closest dive to Cala Mia Island Resort, 40  minutes from the resort. The 16 volcanic islands make up what is known as Isla Secas. Visibility in this area is superb. You can see huge schools of fish that will surround you in a cloud in which you can make dance with the movement of your arms.  Colorful reef fish such as parrotfish, golden phase, Moorish idol, barberfish, and surgeonfish abound. Turtles are very abundant in the area while our shark dive is great to see the local white tip population. The area has 15 + dives sites while new ones get found every day.

A great Panama diving location that is 50 minutes from the resort, with 4 + dive sites surrounding the Ladrones Island. It is possible to see species of jack and snapper, white tip sharks as well as Pacific barracuda and needlefish. Species of manta ray, such as devil, mobula and eagle can be spotted quite frequently, as well as turtles. Reef sharks such as nurse, white-tip and black-tip swim in these waters. Is great for divers with more experience. Giant manta rays visit this area from May to November. During the humpback whale season, from July to October, you can see humpback whales swimming with their calves. Big schools of fish, including barracuda, snapper, and jack, will swim past divers.

There are very few places in the world where you can dive into a UNESCO World Heritage Site, and Coiba National Park is one of them! Many consider it the best place to dive in Panama. Cala Mia Island Resort can organize diving trips to Coiba. This national park contains the island of Coiba and 38 smaller islands which are next to the Gulf of Chiriquí National Marine Park. Coiba is home to the second-largest coral reef in the Eastern Pacific.

There are four main diving areas: Rancheria Island, Canales, Coiba Island, and Contreras. Most dive sites within these places are for advanced divers. If you do not have much diving experience, it is best to dive in the Gulf of Chiriquí or give prior notice. Mona Lisa is one of the few spots for unexperienced divers with large schools of king angelfish and butterflyfish. It remains protected from currents and it is possible to do shallow dives down to 46 feet (14 meters). In contrast, Jacob’s Ladder is one of the most advanced dive sites with drops that reach up to 130 feet (16 to 40 meters). This is a great place to see the big game, such as Galapagos and tiger sharks, tuna, barracuda, sailfish, and marlin.

Diving in a protected area definitely has its advantages since there are more life and big fish than in other parts where people can fish. There is a very good chance of seeing sharks while diving, including white tip reef sharks, bull sharks, oceanic white tip sharks, and whale sharks from December through April. January through April is when the giant Mobula Mantas come in the hundreds, soaring up to three meters out of the sea. You can also see pilot whales and humpback whales, as well as giant turtles.

Many Panamanians learn how to dive in Portobelo since it is so close to Panama City. Located in the province of Colon, this area is quite historical since it was where the Spanish Conquistadors had their custom house. This is where they used to store goods looted from South America before shipping them to Spain. Of course, the pirates wanted the treasure as well, so all the famous pirates of the era passed through. Including Sir Francis Drake, who contracted dysentery and died at sea off Portobello on January 28, 1596. “Drake” island, where experts believe his body sunk, is one of the most popular Panama diving sites.

All the best Panama dive sites are quite close to shore, so they are a short boat ride away. Another popular diving site is the wreck of a B-45 airplane in 70 feet (21.3 meters) of water. This site, called Buenaventura Island, has three dive sites to choose from. One Rock is a great place to find sand sharks in canyon style channels.  More advanced divers can go to Salmedina or Tres Hermanas which are deeper and have stronger currents. Many opt to stay for lunch and/or spend some time at the beach.

It is possible to dive in Bocas del Toro year-round, but divers prefer to go during the dry season, which would be February through April and September and October. There are fewer waves these months so that means better visibility. Bocas del Toro has fewer tourists visiting since many who go to the archipelago are surfers. Thankfully, Panama is hurricane-free, so that helps persevere the reefs. You can find 95% of all soft and hard coral species in the world here. Many species are endemic to the area. Reef environments are perfect to find many colorful tropical fish, sea horses, lobsters, octopus, squid, and starfish. If you are lucky you can spot turtles, moral eels, or nurse sharks as well.

There are about 15 dive sites in Bocas del Toro that dive shops commonly visit. Hospital Point (which gets its name for being the location of the old Chiquita Banana Hospital) is the closest dive site to Isla Colon. Zapatillas Cay and Escudo de Veraguas (requires special planning) are the furthest away. Almost all sites range within the 52 to 66 feet (16 to 20 meters) range, except for Tiger Rock which goes down 115 feet (35 meters).

Feel free to contact us to help you plan your diving trip to Panama.