What is Panama, Republic of Panama ? There are different theories regarding the name Panama. In the country there is an abundance of a type of tree that is called Panama. The first settlers arrived to Panama in August which is a month when butterflies abound.

Officially known as the Republic of Panama, this is a transcontinental country in Central America and South America. It lies throughout the land formerly known as ''Isthmus of Darien''. Bordered to the west by Costa Rica, Colombia to the southeast, the Caribbean Sea to the north and the Pacific Ocean to the south.

The Republic of Panama was once part of the Spanish empire. Prior to the Spanish colonial era, Panama was settled by indigenous tribes that lived off edible plants and fruits, hunting and growing corn, root crops and cacao. They lived in huts made of palm leaves over a rounded structure and slept in hammocks. Up to the date there are still many indigenous tribes that have followed this way of living.

The country had a strategic and economic importance, but it also went through an era of slavery until it was forced to an end 30 years after the separation from Spain which was in 1821. Right after separating from Spain, the Isthmus was convinced that by joining Colombia, back then known as the New Granada, the nation's destiny was going to move in a progressive direction.

Come visit Panama, we invite you to explore our packages today!

Getting to Cala Mia has never been easier because International Arrivals Into Panama City are growing.

There are an increasing number of direct flights to Panama City (PTY) from numerous cities across the Americas and Europe. Check arrivals here.

The flight time is 45mins. 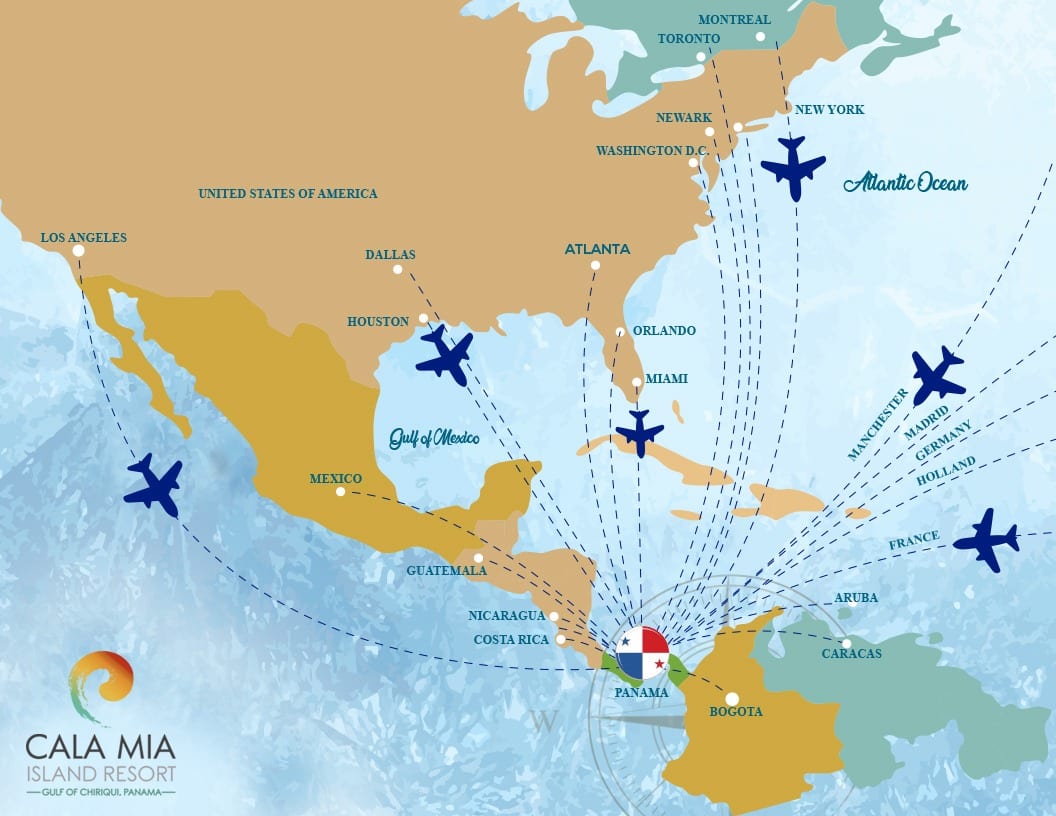 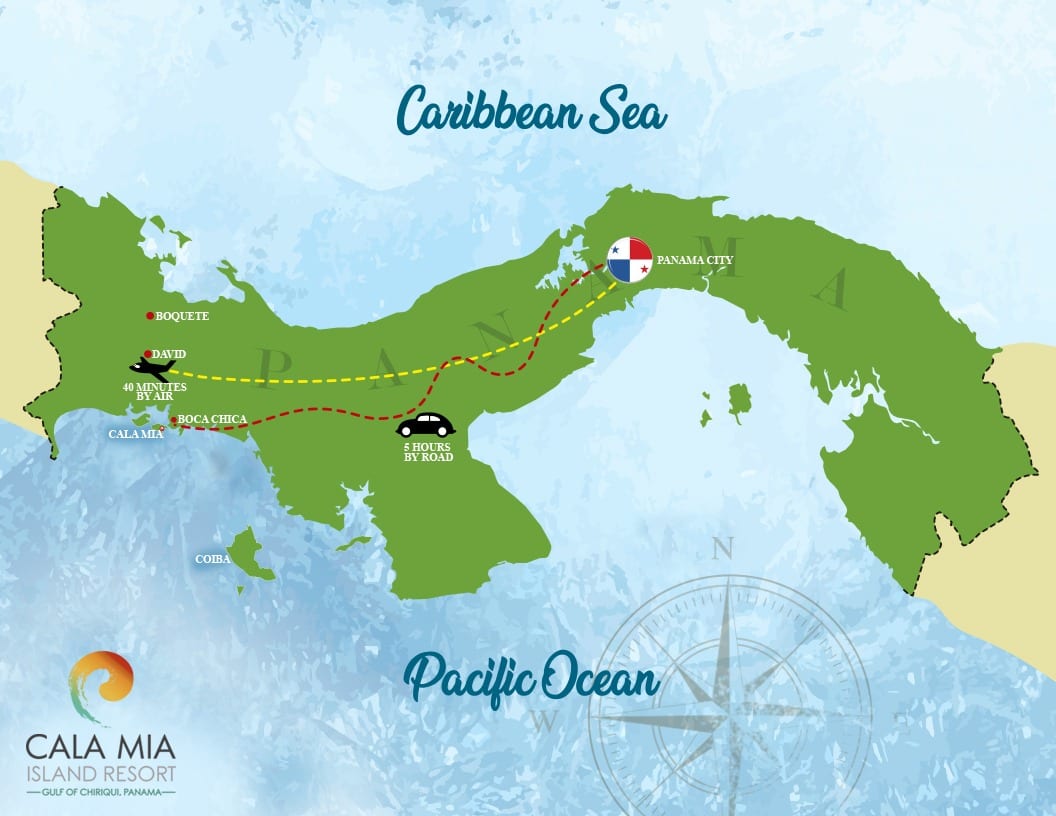 From Panama City you can travel to Cala Mia by either:

By Car you travel on the Pan American Highway a new double laned highway that takes approx 6 hours to Boca Chica where you take the ferry to the Island.

You can drive yourself from David (1hr) or Panama City (6hrs) or let us arrange an independent driver to meet you at David airport and bring you directly to the boat ramp in Boca Chica  via the Inter-American Highway.

Once in Boca Chica our Captains will greet you and transfer your party & luggage to the resort. The boat ride takes 20 minutes. 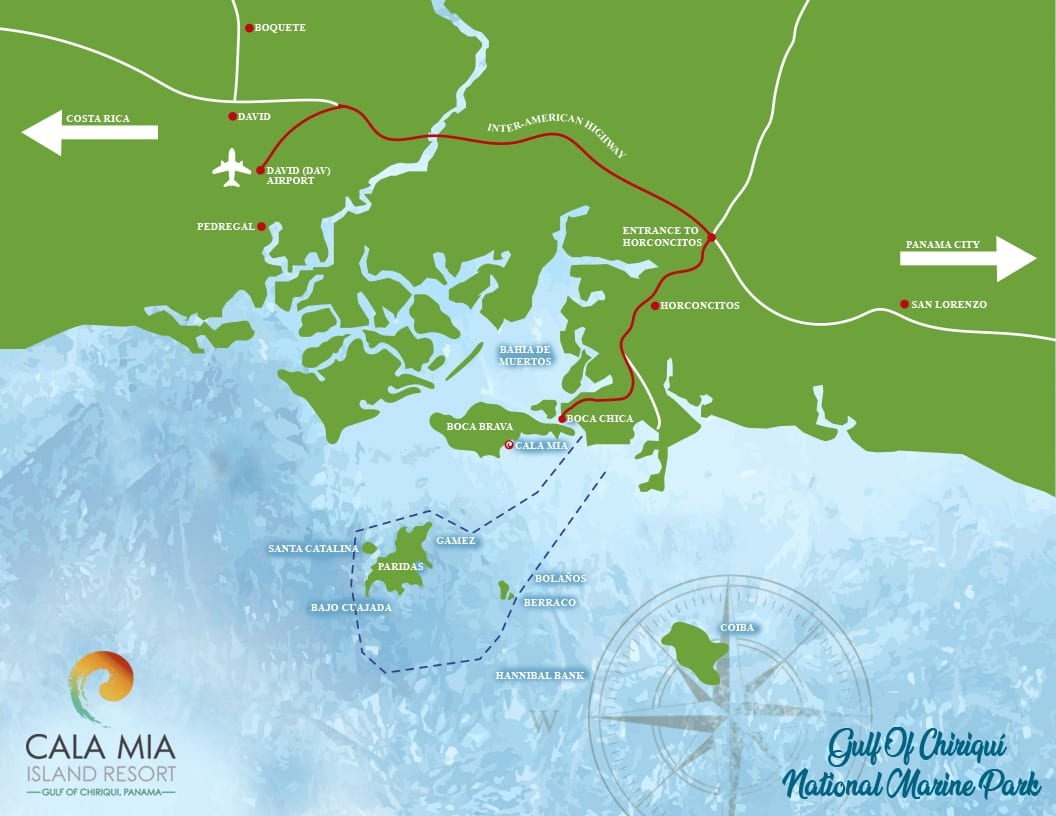 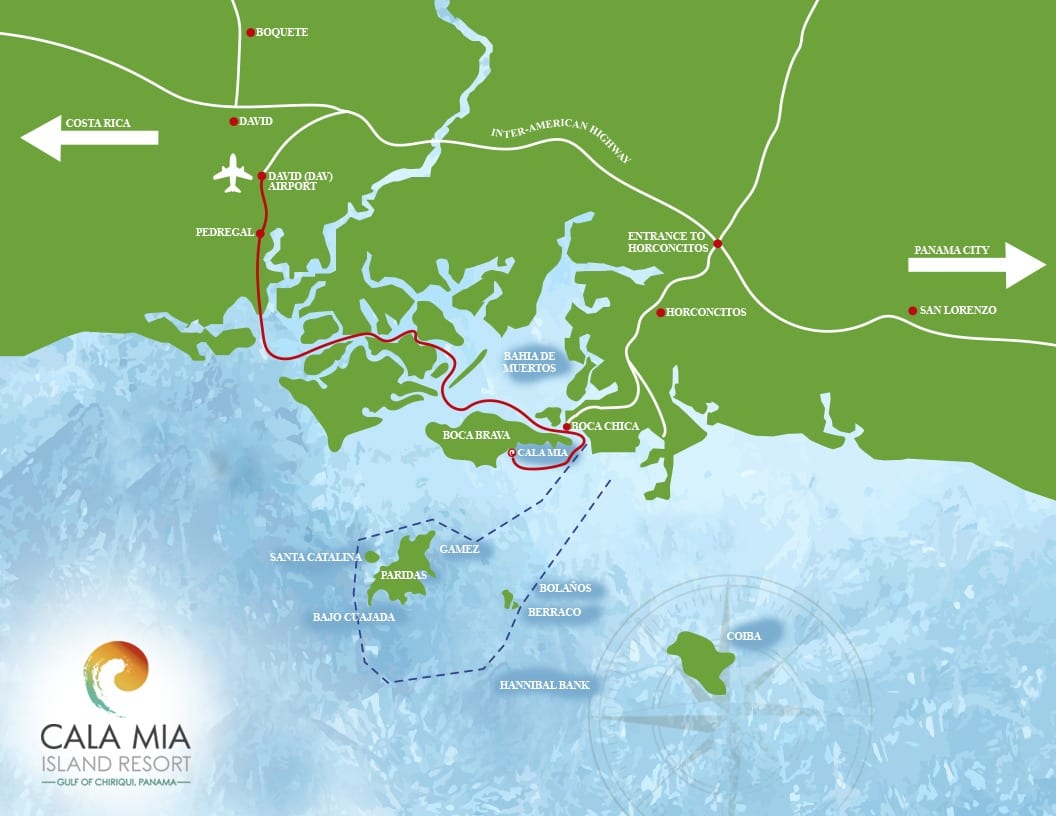 From Pedregal we will schedule a private boat to transport you directly to the Resort.

The Captain will have refreshments on board and you’ll experience an amazing 60 minutes adventure through lagoons, mangroves, tidal-wetlands, and estuaries of Panama.

The private boat transport is not included in the package rates, please request the upgrade.

After you turn off the Inter American Highway to Horconcito, you pass through the town of Horconcito.  At the town square the the road will fork, take the middle fork to Boca Chica. After another 5 miles you will come to a Y, stay left, you will see many signs of different resorts.

When arriving in Boca Chica keep straight or to the right, you will see a small gas station on the right, then take your 1st right, the street with a little white church. Behind the church there is a guarded parking for $2 per day.

The boat ramp is 60 feet down the hill on the main road next to the Panama Sport Fishing Lodge.

Our Captain will meet you there. 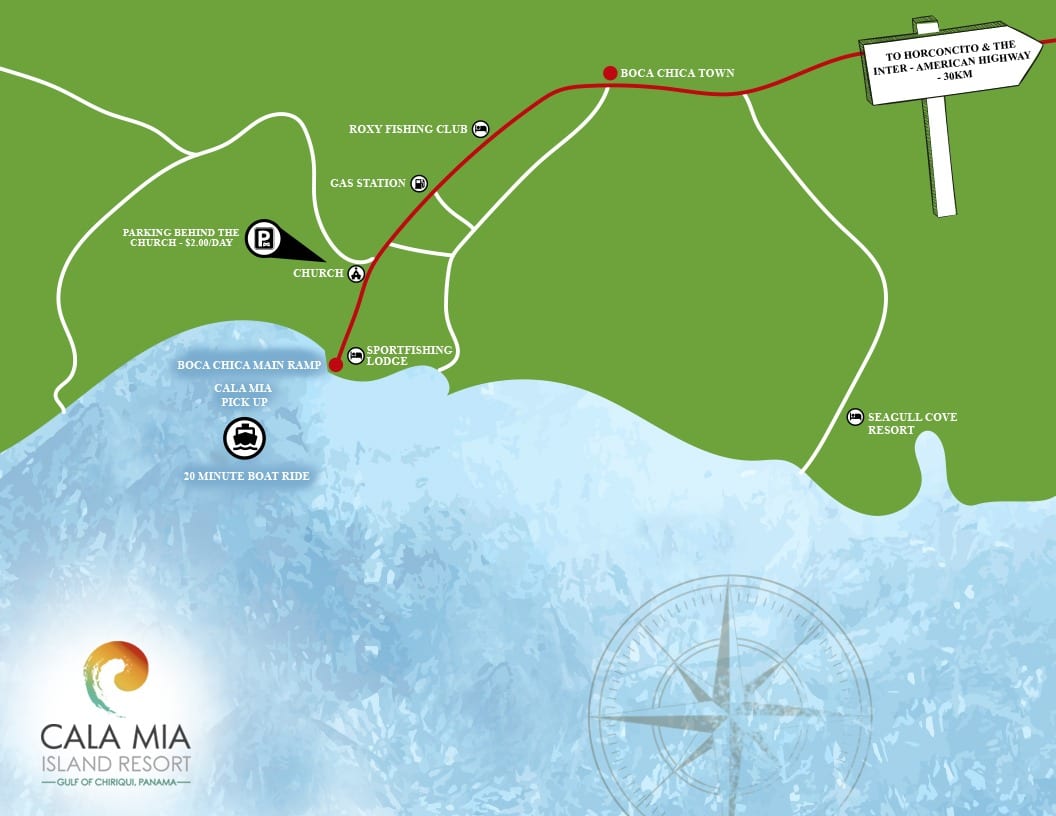